“The Treflik Family” series is a Polish animated film whose each part brings an important message and teaches children such values as family ties, friendship, respect, honesty, and tolerance. The series is made using the traditional doll animation technique. This technique requires taking 25 photos per each second of the film and the animator slightly changes the positions of the dolls for each photo. In the course of production of “The Treflik Family”, 3D print was used on a large scale for the first time in Poland. Doll heads with exchangeable mouths, elements of the figures’ clothing, and even unique props were printed. In the production of the series, we use the technique of image recording in 4K quality. 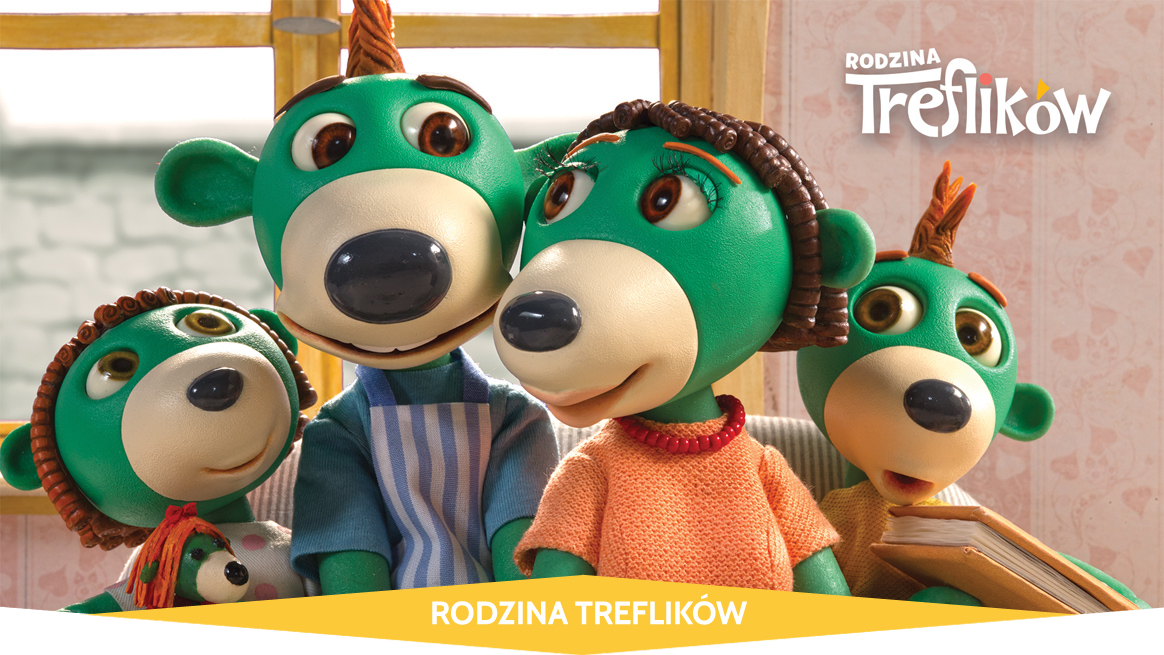 Second concept store “Land of happiness” in Arkady Wroclawskie is open from now on!

Marek Skrobecki, director of “The Trefliks Family” gives a lecture about doll animation in the Gdansk ASP

We organise a Children’s Day in partnership with TVP ABC in Warsaw’s Lazienki Park. What’s more we present ourselves on the stage and appear on the TV in “Pytanie na sniadanie”

Thrid and the fourth season of our TV-series is available on CD!

Trefliks visit the Kashubian May long weekend of enterpreneurs

KIDS zone was created during the bridge2success project

Treflik is present on the Festival of Comics and Drawing

We received a silver bundle of Silly Billy during the 7th Polish Festival of Animation O!PLA for the “Apricot jam” episode

We flight on the Aerobaltic Airshow 2018 in Gdynia, Poland

WOW! Feel invited to Nick Jr in Poland, Romania and Czech Republic where you can find our tale!

Our new CD is out! This time “ABC of propriety in songs” with Treflik’s Family

Episode “Treasure hunt”runs in a competition on the International Film Festival in Annecy, France in category “best TV series”. What a privilege to be there!

Premiere of the “Treflik Family” for a small audience in Cairo

New section of our website is ready! – The Trefliks Family

“How a tale is made” – lecture presented on the exhibition “Bedtime story. History of animation”

We share secrets about our work and studio on the air – RMF Classic.

New record set at the beginning of the new year – 331 thousands of viewers watching our new episode live!

From today we are available on TVP ABC – We invite you !!!

The episode script competition for the new adventure series has been resolved.

We invite you to take part in the script competition for the series “The Treflik Family”.

Hello France! We’re at the Cartoon Forum in Toulouse, keep your fingers crossed!

Treflik presents at the 7th Pomeranian Days of Energy in Gdańsk.

This is really happening! According to the voices of the Internet users, three songs from the TV series “The Treflik Family” will be on the album with the greatest hits of TVP ABC part 2.

We are launching the second season of the “The Treflik Family” on YouTube.

We have new puzzles and a great game! Straight from Trefl SA!

“The Treflik Family” is on air on TVP3 Gdańsk.

Together with the Police Headquarters in Sopot and the Haffner Hotel we start a safe holiday! “ABC of Safety with The Treflik Family” campaign – Let’s start!

We’re having fun! Great “Musical ABC with The Treflik Family” in the Ergo Arena. Among the attractions: Encounters with Trefliks, concert of Margaret, children from the program “Teleranek”, Jerzy Petersburski Jr, the power of games and competitions with prizes. A great Children’s Day for the whole family!

We still do not believe it! Inauguration of the first kindergarten group in Poland “Trefliki” in Zaborze near Oświęcim. On the occasion of a wonderful performance prepared by children and the final of the art contest “Trefliki Wiosną”. Wonderful day!

Premiere of the Kashubian version of the title song – “Trefliczi” in Radio Kaszebe.

The decision of the birthday TVP ABC competition! The art competition was influenced by the record number of works in the history of TVP ABC! Almost 900! Thank you!

Kids to start! Together with Treflik we take part in the PKO Grand Prix Gdynia run.

“The Treflik Family” at the toy fair in Nuremberg! Congratulations Trefl SA!

Good news for all kids. We start our annual cooperation with the TVP ABC Magazine (Edipresse publishing house). It means a batch of games with Trefliks every month!

Award for “Trefliks” for the best music video for children as part of the Yach Film Festival. The director of the video clip – Marek Skrobecki, the music of Andrzej Krauze and the wonderful singing of Natalia Kukulska – all this has been noticed!

Portal Trojmiasto.pl has prepared a great video about the work of Studio Trefl SA.

St.Nicholas’ Day with Helios Cinema and “The Treflik Family”.

We are with Treflik at the “Gra i Zabawa” fair in Gdańsk.
October

We are happy! The whole world will see Trefliks – we’re starting to broadcast on TVP Polonia!

Great emotions and a reason to be proud. We are at the International Animation Festival in Annecy (France)

Historic date. A day full of joy and emotions. Little viewers and their parents have a chance to see the effect of the work of the Studio Trefl SA crew. The premiere of the first season on TVP ABC!

A historic and exciting moment! FIRST SLAP of “The Treflik Family” series in Studio Trefl SA!

Creation of puppets (modelling and production)

Education of the youth